Why do you Paint Animals Wearing Sweaters?

The question was actually “why do you paint sweater fish” since my paintings started with, well, insulated piscine species. It was a question deserving a carefully considered answer, but unfortunately the only response that came to mind was a pat “because they’re cold water fish”. A lame rimshot at best and only a little bit better than “why not?” So here’s my attempt to properly answer the question somewhat, if not completely, in this post. 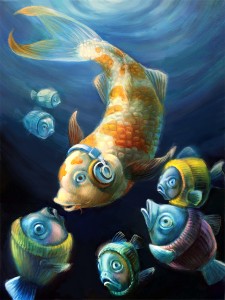 Most of my art reflects an attraction to the improbable, incongruous, and/or unexpected There is something about a visual pun that translates so well — perhaps because the tradition isn’t far removed from the original clown nose and shoes. And in this simplicity, viewers hopefully have a chance to experience a little mirth. So how does any of that translate to sweaters?

I would like to say my ideas were inspired by a trendy movement like yarn bombing (“bombing” — kind of a violent term for the almost completely innocuous act that would at worst slightly annoy), but it’s more likely the illustrations for Peter Rabbit and Babaar  were the concept’s true origin. Again, I like exploring contrasts and water-loggged sweaters seemed to be an excellent textile choice for a hydrophilic animal. I could also have been influenced by a universal comedic prop since a google search reveals more than one artist rendering sweater covered animals (reference Belcher’s Sweater Cat, for example). So, in so in way too many words,  “I don’t know”except by sharing a sense of humor, the viewer might have a better day 🙂 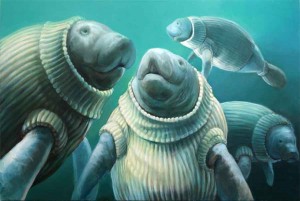 Life is full of ironies and absurdities.
—Adam West