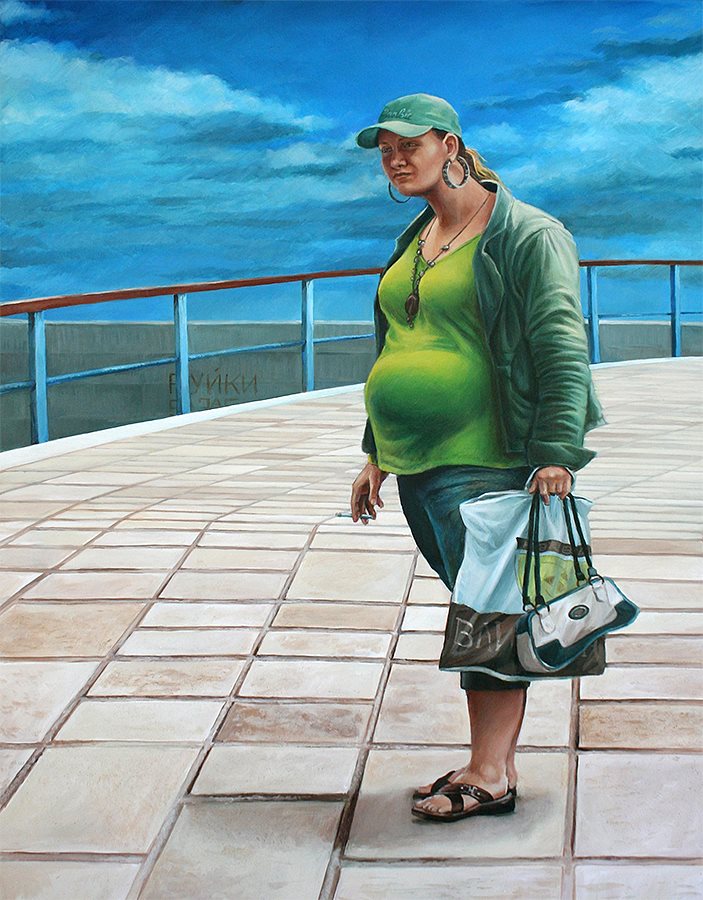 I had a really difficult time painting this piece. It was a foolhardy venture starting out a large piece like this one using only a lightly tested technique. It meant eventually combining both old and new processes just to finish it. Worse yet was the worry about alienating an audience or addressing the model in such a way that she would appear to be a side show curiosity. It’s my sincerest hope that this piece does neither since it is really about what was behind the woman’s actions.

What struck me first about the Ukrainian woman was how much she was dwarfed by a vast desert of hand cast cement that covered the featureless promenade. In reality, the artificial shoreline was broken only by Victorian inspired lamp posts and industrial structures that would normally aid in disembarking the cruise ships. But I removed those since the width of my canvas would not convey how barren the environment was without these modifications.

The lady herself seemed to be encumbered by fashion past, having no hope of anything resembling maternity clothes.

The lady herself seemed to be encumbered by fashion past, having no hope of anything resembling maternity clothes. What she wore was in mode even if it was only minimally accommodating. She also held a designer purse and boutique shopping bag in one hand and  a cigarette, held American style, in other. To be fair, she might have been holding the cigarette for her boyfriend or husband while he visited a bar or storefront that didn’t interest her, but more likely she paused when she saw someone so as not to be seen smoking.

At the time, I couldn’t help but wonder if this woman deemed everything so hopeless that no future exists for anyone, even her unborn child.

The actual explanation was probably simpler, though. In 2007, Ukraine was still broadcasting how drinking and smoking could harm an unborn child, much like the March of Dimes had in the United States in the ’70s. Her mother might have smoked when she was pregnant with her, so she might think that the advertisements were exaggerations at best. She would certainly have a healthy distrust of a government that in a prior incarnation left individuals to suffer from Chernobyl rather than immediately admit to the disaster.

What struck me first about the Ukrainian woman was how much she was dwarfed by a vast desert of hand cast cement that covered the featureless promenade.