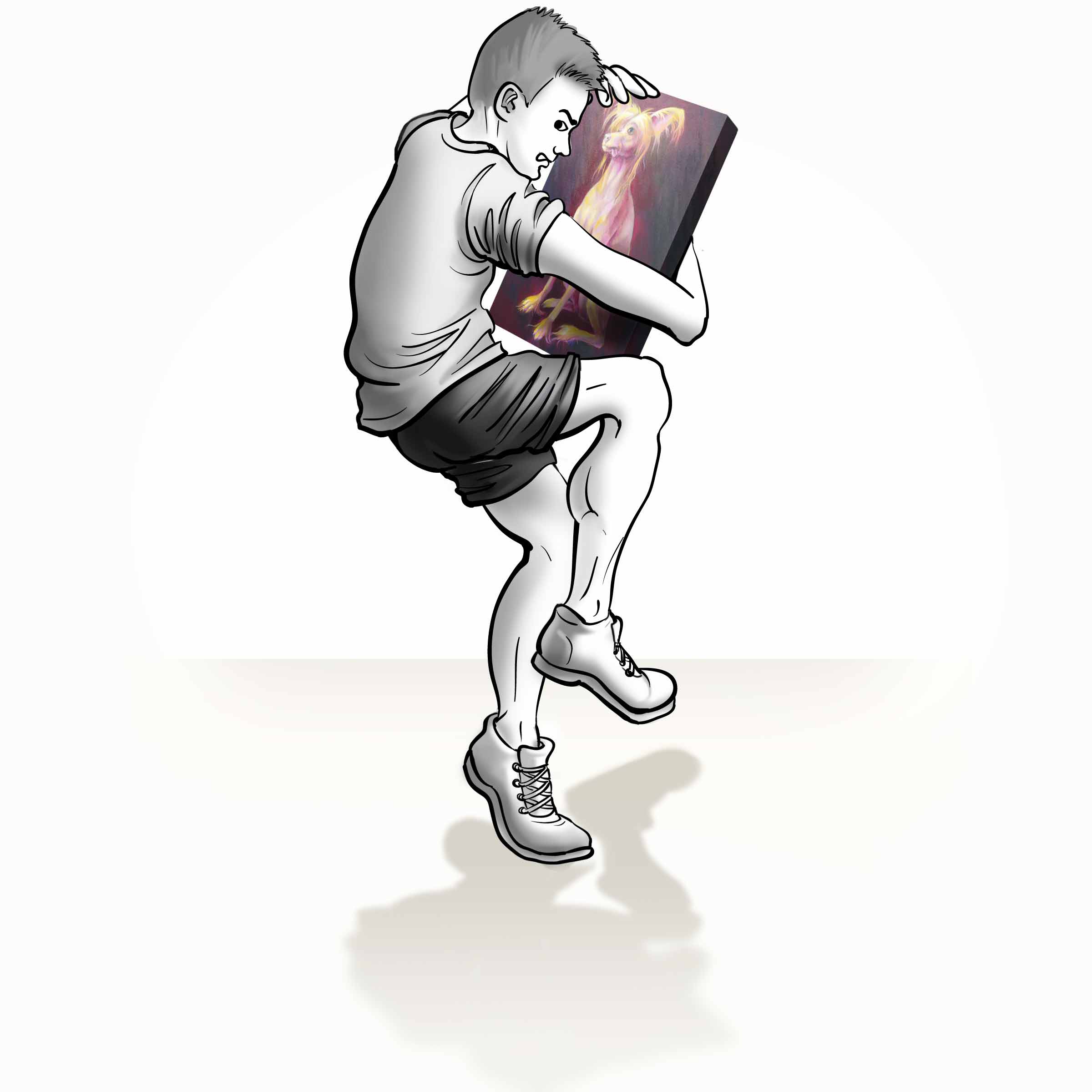 Not counting the person who took one of my pieces home for “safe keeping” after closing an exhibit (yes, you know who you are), I never thought my art would inspire someone to steal a painting. Granted, the potential theft wasn’t very well planned.

The would-be perpetrator benefited from an unusual arm span and the kind of liquid coordination that allowed him to snake his hand around an array of merchandise to pluck the painting from its stand without even a twang from the picture wire. However, the speed of the act attracted attention and interrupted conversation. He glanced our way and then looked as if he was only holding the painting to see if it looked different under another light source. Of course, the light happened to be outside the store.

The would-be perpetrator benefited from an unusual arm span and the kind of liquid coordination that allowed him to snake his hand around an array of merchandise to pluck the painting from its stand without even a twang from the picture wire.

No, it’s the tongue.” the art critic interrupted. He added a sigh for special effect. “Why are people always painting them with their tongue sticking out?” Maybe because there are a lot of photos featuring Crestie tongues? But given this man’s passion, I started to say instead “Well, maybe my reference wasn’t AKC…”. He interrupted again with “look, I have pictures of my own dogs.” Ok, so maybe he didn’t want to hear any excuses. At least he wasn’t offended by the painting’s color, which made my Crestie look like a punk rocker.

The man retrieved his phone from a very tight pair of shorts (leaving no doubt it was an iPhone before it even left the pocket). Please let this be a really strange way of  requesting a commission. Meanwhile, the store’s owner had extracted the painting from his grasp and tucked it safely out of sight., Since the man had finally calmed down, the whole situation seemed diffused.

But that’s when things got really weird.

Quickly flipping past a load of images that looked like a prep for his personal injury suit, he finally landed on images showing his dogs. True to what he said, not one had a tongue showing.

He didn’t help when he mentioned having been an executive in certain big city without specifying which company. First reaction: “yeah right”. The second was to remember an article I just finished about how many executives shared traits with sociopaths. What if those photos weren’t of his injuries, but a visual threat instead? His continuing harangue about the Crestie breed didn’t help.

When he mentioned how breeders who introduce flaws into the line should be stopped (the way he enunciated the word “stopped” seemed to leave method implied), I stopped listening and started watching him for renewed signs of potential violence, only finding a sense of intense relief when he left the store many minutes later. After another hour or so, I began to hope my misgivings were imagined or better yet…the whole experience might have nothing more than a fluke and I was just being overly imaginative.

…Except he came back on two separate occasions to try again. Maybe it was time to remove the painting from view and give everyone a rest for a few months.