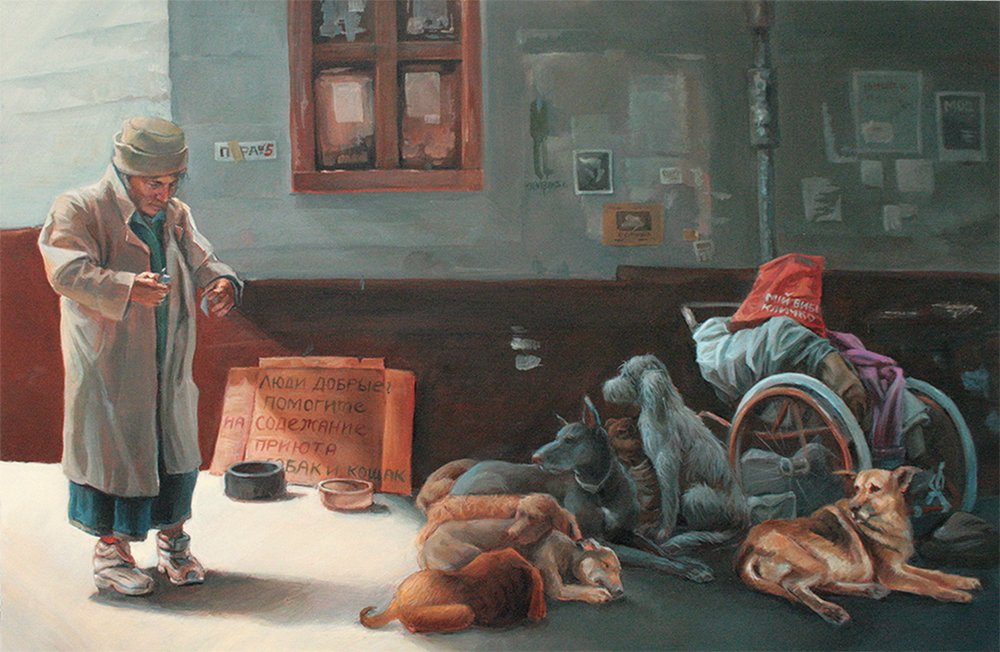 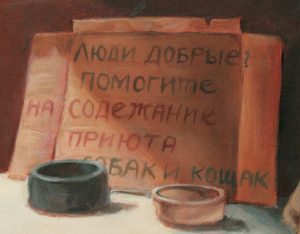 Roughly translated, the content on the sign reads “Kind (dear) people, please help me a little in continuing the care of dogs and cats.”

Hurrah! I finally got the news that my piece was accepted into the Vision Art Show 2016 at the Strawbridge Art League (SAL).  Thank you for your acceptance!. Even as a refusée (yes, the League is definitely into the whole salon tradition), an artist gets to exhibit in SAL’s new location. But my piece made it and will be shown at the Art Gallery of Viera —not a bad deal at all.

The woman was so determined to hide her own infirmity that the wheel chair was parked in the shade and buried under clothes and bags. The chair was only visible to me after tweaking the photo’s contrast afterward.

The  main show will open on April 9 from 5:30pm to 8pm, while the other show at the SAL gallery will open on April 16th from 3-6pm (during the Art Walk, a great way to see any show in downtown Melbourne). Both Refuseé and main exhibits will run from April 7th-May 9th at their respective locations.

In case I’m not able to make the opening on the 9th here’s an explanation of the accepted piece :

This painting from original photograph depicts a woman in Kiev begging for food for her dogs and cats rather than for herself. She was so determined to hide her own infirmity that the wheel chair was parked in the shade and buried under clothes and bags, becoming visible to me only after dodging the shadows away from the objects. The woman possibly used the wheel chair as a walker once her day was done, never taking any relief from the pain of standing lest she be seen sitting in it. Of course, that’s just a speculation since our host never allowed us to approach.

Assuming this lady was born with health problems and not succumbing to advanced arthritis,  she probably survived both the Nazi and Soviet invasions. That would mean she would escape one group’s delusion of improving mankind through killing it’s “weakest” members only to face another group’s fanatic attempts to remove all handicapped individuals from the general population (a horror story in itself) so that their influence would not “hold back” the evolutionary process of the general population. If so, this woman might have had to live in constant fear of being identified as disabled, an existence I couldn’t even begin to imagine.